The Tale of Kaliurang 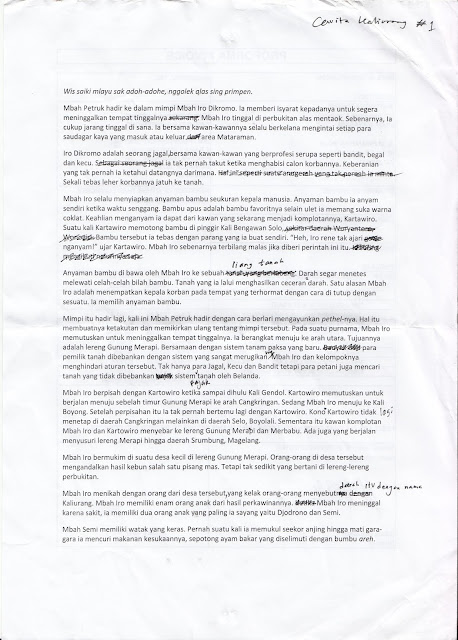 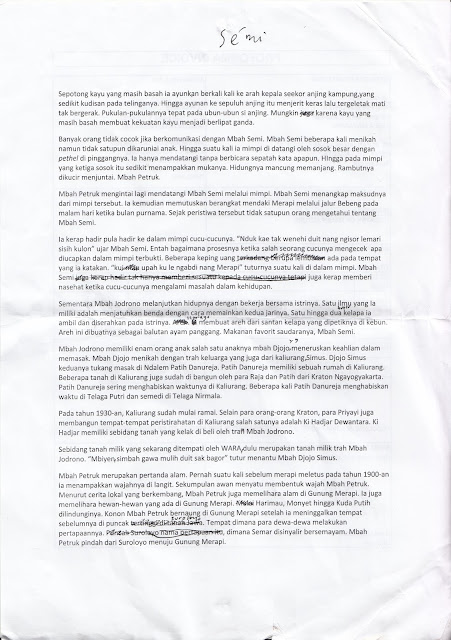 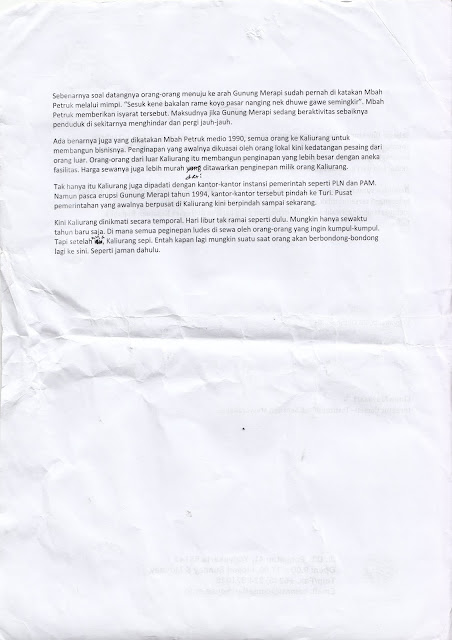 “Wis saiki mlayu sak adoh-adohe, nggolek alas sing primpen”
(“Off you go, run as far as you can, seek for the deepest forest”)

Mbah Petruk came into Mbah Iro Dikromo’s dream. He signaled him to leave the house he was living in. Mbah Iro was living in Alas Mentaok hills. In fact, he seldom stays there. He and his friends were always wandering around, lurking every rich merchant who enters and leave through Mataraman area.

Iro Dikromo was a butcher, along with his friends who work as a bandit, begal and kecu . He never hesitates to finish off his potential victim. A courage he never knew where it came from. With only one slash, the victim's head will fall to the ground. Mbah Iro always prepares a woven bamboo in a size of a human head. He weaved the bamboo by himself on his spare time. Bamboo apus was his favorite, aside from its tenacity, he is fond of its brown color. He got his weaving skills from his friend who was then become one of his intriguant, Kartowiro. Once upon a time Kartowiro cut a bamboo in the edge of Bengawan Solo river. He cut down the bamboo with a machete he made by himself. "Hey, Iro let me teach you how to weave a bamboo!", Kartawiro said. In fact Mbah Iro was lazy when he was given that command.

A woven bamboo then brought by Mbah Iro into a burrow. The fresh blood drips through the crevices of the bamboo slats. The path that he goes through scattered with blood spills. The one and only reason for him carrying the bag in human head size was to place the victim's head in a respectable place by covering the head with something. And he chose a woven bamboo.

The dream comes again. This time, Mbah Petruk comeback by swinging his- pethel (lash). It made Mbah Iro scared and he cannot stop thinking about the dream. In a full moon, Mbah Iro decided to leave his home. He set off toward the north. The destination was the slopes of Mount Merapi. Along with the latest forced cultivation system, landowners were charged with a very disadvantageous system. Mbah Iro and his group tried to avoid this new regulation. Not only the butchers, bandit, begal and kecu; but also the peasants who were also looking for a land that was not burdened by the Dutch’s land tax system.

Mbah Iro then lived in a small village on the slopes of Mt.Merapi. The people in the village rely on one of the variety of bananas in their garden, it is pisang mas, the baby banana. But there were lots of local people who farm on the slopes of the hills.
Mbah Iro then married to a local woman from a village which later called Kaliurang. He has six children from his marriage. Later, he died of illness. He had two children he love the most: Djodrono and Semi.

Mbah Semi was a harsh character. Once he hit a dog to death because the dog stole his favorite food, a piece of grilled chicken covered with areh (reduction of coconut milk with herbs). He swung a wet piece of wood many times toward the head of a little mound dog with a rash of scabies in his ears. Until the tenth swing, the dog screamed out loud and lay motionlessly. The hit was right on the crown of the dog. Perhaps because the wood was still wet, its strength multiplied.

Many people found it uncomfortable to interact with Mbah Semi. Mbah Semi married several times but none of them were blessed with children. Until one day, in his dream, he was visited by a large figure with a lash on his waist. He only came in silent. Until the third dream, the figure shows a little face. Its long nose is elongated. Its long hair was pinned down: Mbah Petruk!

Mbah Petruk comes again to Mbah Semi through dreams several times. He then later found the purpose of the dream. He decided to climb Merapi through the path of Bebeng at night when the full moon came. Since the event, no one ever heard about Mbah Semi.

While Mbah Djodrono, he continued his life by working with his wife. There was one special skill he had: dropping coconuts straight from the tree just by clicking his fingers. He grabbed one to two coconuts and hand it over to his wife. She then made areh from those coconuts that he picked from the garden. This areh was used to cook the grilled chicken. It was the favorite food of his brother, Mbah Semi. Mbah Djodrono had six children, one of his children; Mbah Djojo continued his expertise in cooking. Mbah Djojo was married to a family who were also from Kaliurang, Simus. Djojo Simus, both cooks at the House of Patih Danureja. Patih Danureja had a house in Kaliurang. Some of the land in Kaliurang had been owned by the King and Patihs of the Kingdom of Ngayogyakarta. Patih Danureja often spends his time in Kaliurang. He spent several times in Telaga Putri and lives as an ascetic in Telaga Nirmala.

In 1930s, Kaliurang was getting crowded. Besides the people of Keraton, the blue-blooded priyayi were also start to build resting places in Kaliurang, one of them was Ki Hadjar Dewantara. Ki Hadjar had a piece of land that later purchased by Mbah Djodrono descendant. A plot of land now occupied by WARA was formerly owned by Mbah Djodrono. "There is one time, Simbah bring a sack full of money" said Mbah Djojo Simus’s son in law.

Mbah Petruk was a sign of nature. Once before Merapi erupted in the 1900s he showed his face in the sky. A cluster of clouds gathered and formed the face of Mbah Petruk. According to a local story, Mbah Petruk also preserved the nature at Mount Merapi. He also nurture the animals live in Mount Merapi. Tiger, monkey and the white horse were protected by him. It is said that Mbah Petruk lived in Mount Merapi after leaving his previous place at the top of Suroloyo. The place where the Gods do the hermitage, where Semar allegedly residing. Mbah Petruk moved from Suroloyo to Mount Merapi.

As a matter of fact, the arrival of people heading towards Mount Merapi had been already said by Mbah Petruk through dreams. "Sesuk kene bakalan rame koyo pasar nanging nek dhuwe gawe sumingkir" (One day, this place will be crowded like a market, yet when the day has come, they should move away for a while). Mbah Pethruk gave the cue. What he meant by the cue is when Mount Merapi active, the residents in the vicinity has to move and go all the way to the saver place for awhile.
There were some truth on what Mbah Pethruk said in medio 1990, everyone went to Kaliurang to build business. The inn which once originally dominated by the local people has to face a lot of competitors from off Kaliurang. The people from outside Kaliurang built bigger inns with the variety of facilities. The rent is also cheaper than the inn owned by the local people of Kaliurang. Above all, Kaliurang were also packed with strategic government office such as PLN and PAM. But after Mount Merapi eruption in 1994, those offices moved to Turi. The government center, which was originally centered in Kaliurang, had been moved until the present day.

Now, Kaliurang is enjoyed temporally. Its holiday is not as crowded as it used to be. Maybe, only during New Year; when all the inns are rented out to people who want to gather. But after all, Kaliurang is a forsaken place. No one knows when Kaliurang will be packed with tourist again. Like the old times.